The Hughes XF-11 used two of the most powerful airplane engines on earth, had a 100 + foot wingspan and weighed nearly 58,000 lbs. It was flown by Howard Hughes in 1946 to try and become the highest flying and fastest reconnaissance airplane in the world. His first test flight resulted in a crash because of a propeller failure and nearly cost Hughes his own life. The flight and crash of the airplane are well documented in The Aviator.

For the flyable sequences in The Aviator it was required that a very convincing and flyable airplane had to be built. The Aero Telemetry XF-11’s mission was to fly safely at extended ranges such that realistic flight sequences could be viewed and filmed. The mission would require that the airplane fly at speeds in excess of 100 mph and at ranges of up to 5 miles. Flyable scale models lend themselves to production flexibility with respect to filming locations and cost. The models are less expensive and far more believable than CG, plus they can be operated at various areas and altitudes that are not normally available to their full-scale counterparts.
The fuselage sections were made of fiberglass. The fuselages, center cockpit pod, and many of the other composite parts and components used on the flyable XF-11 were laid up by Aero Telemetry personnel. This process required that the parts were reinforced with carbon fiber and HexCell materials in a manner that was consistent with acceptable Aerospace structural design. Fortunately, this process was well documented.

The airplane required the use of a “one of a kind” high-pressure hydraulic system to actuate the retractable main and nose landing gear. The uplink control system featured many of Aero Telemetry’s own electronics subsystems such as RF Amplifiers and antennas. For the structural pieces of the airplane, we used carbon fiber and 7075 Aluminum reinforced wing structures.  The fuselage sections contained both the fuel tanks and the back-up electrical and hydraulic systems.

The plane was flown several times by the Aero Telemetry team at San Bernardino Airport and Catalina Island Airport in California. For some of the aerial shots, the XF-11 was also filmed while flying in very close proximity to a helicopter.  Due to its size, speed, and excellent flying characteristics, Aero Telemetry’s XF-11 airplane made the flying sequences very believable. The background at Catalina Island provided a historically accurate picture of the way Los Angeles looked in the 1940’s. 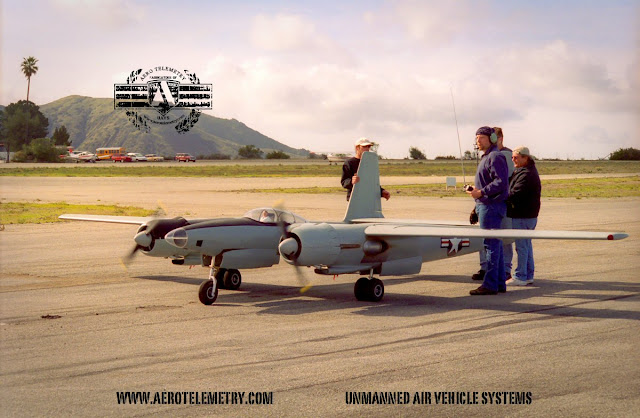 Posted by Aero Telemetry at 3:09 PM