Howard Hughes built the H1-B Racer in 1935 solely to become the fastest airplane in the world. His first attempt resulted in a world record speed of 352 mph.

Originally, “The Aviator” planned on using a full-scale replica of the H-1B. Before it was filmed, however, the pilot and plane were tragically lost while flying back from an air-show. The Aero Telemetry team was already involved with the design of two of the worlds largest flying scale aircraft, the Hughes XF-11 and H-4.

The compressed time schedule necessitated the use of many carbon fiber composite structures and parts for the H-1. In addition, the engine would have to be powerful enough to propel the heavy airplane to speeds fast enough to simulate the world record speed set by the real Hughes H-1 Racer. The airplane required that the team design and manufacture from scratch a miniature high-pressure hydraulic system to actuate the retractable landing gear. In addition, we employed the use of much of our own radio electronics equipment for the command and control systems on the airplane.

The H1-B Racer was flown and filmed to simulate the World Speed Record attempt that Howard Hughes had made in 1935 at Santa Ana, California. For the film sequences of Hughes’ record attempt, the Aero Telemetry team tried to recreate something totally amazing.  The Aero Telemetry H1 Racer provided the cameras and all those who witnessed the flights with some very realistic and believable flight sequences. 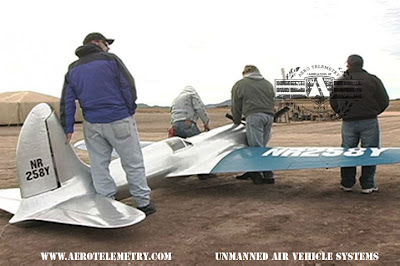